Being Hindu to Becoming Orthodox Christian: The Role of Interior Interfaith Dialogue in the Dynamic of Conversion

Interfaith Dialogue tends to be discussed primarily as engagement with religious faiths other than one’s own in the public sphere; in scholarly debates and when faith-communities come together for prayer or pastoral action. Conversion, however, marks a radical, often highly personal transition from one faith to another. In this paper, I propose to explore how, in my case, the dynamic of conversion was underpinned by a slow-brewing, interior interfaith dialogue and its potential for contributing to public debate. 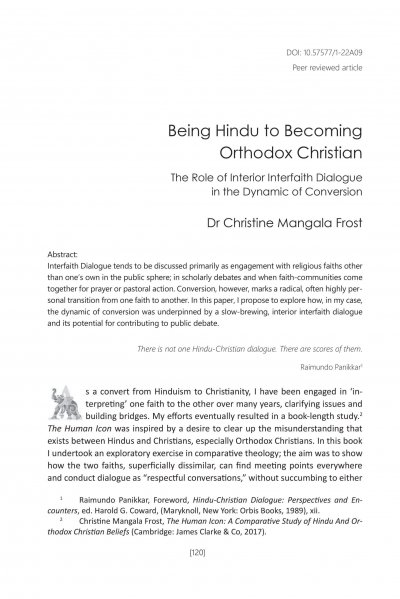 There is not one Hindu-Christian dialogue. There are scores of them.

As a convert from Hinduism to Christianity, I have been engaged in ‘interpreting’ one faith to the other over many years, clarifying issues and building bridges. My efforts eventually resulted in a book-length study. The Human Icon was inspired by a desire to clear up the misunderstanding that exists between Hindus and Christians, especially Orthodox Christians. In this book I undertook an exploratory exercise in comparative theology; the aim was to show how the two faiths, superficially dissimilar, can find meeting points everywhere and conduct dialogue as “respectful conversations,” without succumbing to either polemical acrimony or placatory consensus. I found that the powerful intellectual and spiritual traditions of Orthodox Christianity offer numerous opportunities for revitalising what seems to have become too often stale or stalled dialogues with Hinduism. While I wrote from an Orthodox perspective, I regularly ransacked my Hindu experience for establishing fresh ways of discussing convergences and divergences in theological doctrines and pastoral strategies. In order to sustain an empathy-based dialogic mode, while delving into the riches of both faiths, I confined myself to occasional, brief references to the personal story of my conversion, although my discussions were inspired and fed by that crucial change in my life which was the result of a long and ongoing ‘interior dialogue.’ In this article, I wish to present the story of that ‘interior inter-faith dialogue,’ (rather ‘dialogues’) which chart(s) my journey from being Hindu to becoming an Orthodox Christian.

It is a three-part story…