Christendom Cracking at the Seams: Indigeneity, Conciliarity and Catholicity at the 1910 Kazan Missionary Conference

The Kazan 1910 Missionary Conference, a gathering of clerical and lay missionaries of the Russian Orthodox Church, met to respond to the consequences of the Decree on religious toleration of April 1905, in particular the islamification of the Volga-Kama Turkic and Finno-Ugric minorities baptised into Orthodoxy between the 16th–18th centuries. The article focuses on contributions to the conference by representatives of these minorities and assesses the extent to which issues emerging for them out of Nikolai Il`minskii’s missionary promotion of vernacular languages and indigenous personnel were resolved by the conference. The article also discusses the conference in the trajectory of the reform movement within the Russian Church, especially its concerns for  ecclesial conciliarity (sobornost) and independence of the church from secular power, which were increasingly controversial after 1905. The article concludes by bringing the Kazan 1910 conference into conversation with the Edinburgh 1910 Missionary Conference by exploring areas where the conferences diverged and converged. It argues that the two events faced similar issues as churches and missionary societies in both East and West had, for over a century prior to 1910, been propagating the Christian faith in the context of empires. 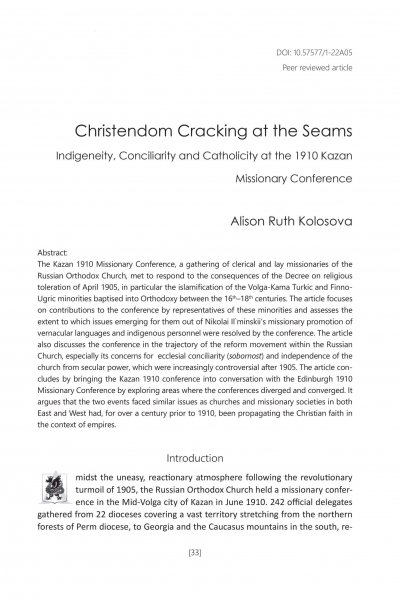 Introduction: Amidst the uneasy, reactionary atmosphere following the revolutionary turmoil of 1905, the Russian Orthodox Church held a missionary conference in the Mid-Volga city of Kazan in June 1910. 242 official delegates gathered from 22 dioceses covering a vast territory stretching from the northern forests of Perm diocese, to Georgia and the Caucasus mountains in the south, recently-conquered territories in Central Asia, as well as the Mid-Volga’s own multi-ethnic regions which had been incorporated into the Russian Empire after the conquest of Kazan in 1552. Poised midway between the social upheavals and church reform movement of 1905–1907 and the Revolution of 1917 which provided the backdrop for the long-awaited All-Russian Church Council (Sobor) of 1917–18, the conference’s discussions and resolutions can serve as a useful context in which to assess the predominant concerns and the key figures influencing the Russian Church’s understanding and praxis of mission on the threshold of the twentieth century.