It has become common for Churches in now post-Christian societies to look back nostalgically to eras in which Christianity was the predominant faith. In Greek-speaking Orthodoxy, this ‘Golden Age‘ is identified with (post-Justinian) Byzantium, or, in its less triumphalist version, with the Ottoman period. In the latter, Christians are imaged as a close, homogeneous community of martyrs persevering in a hostile environment and ready to cast out the few apostates. Although modern research has produced more nuanced images of both periods, such nostalgia is common in Christian (in this case Greek Orthodox) popular culture. In this context, Evi Voulgaraki’s book is particularly welcome, as it deals with interfaith encounters between Pagans and Christians in the cosmopolitan setting of 4th-century Antioch, viewed by the Church Father John Chrysostom. The main point of the book is that mission was essential in John Chrysostom’s teaching, and that he encouraged social interaction between Christians and Pagans on many levels as a means to attract the latter to salvation. The book includes a detailed English summary (pp. 373–385), so I will highlight only a few points here. 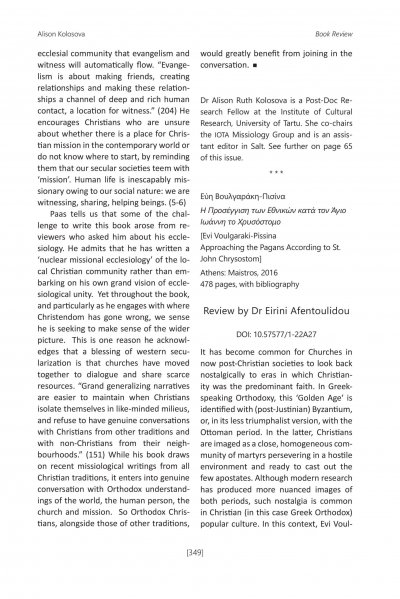