In his highly readable and thought-provoking book Pilgrims and Priests: Christian Mission in a Post-Christian Society, Stefan Paas, Professor of Missiology at universities in Amsterdam and Kampen in the Netherlands, focuses on the challenge of what it means for Christian communities to have a missionary identity amidst the deeply secularized societies of the West.  The book aims to renew missionary vision among Christians who feel themselves to be shrinking, irrelevant minorities, or are haunted by the connotations of the word ‘mission’ and its associations with colonialism and violence.

My concern in reading the book was whether it has anything relevant to say to Orthodox Christian communities concerned about the shape witness and evangelism could take for them in contemporary secular Western contexts.  I was pleasantly surprised to discover that Paas’ critique of the missionary models that have motivated many in Western confessions over the last century leads him to present an alternative vision which draws on themes close to the heart of Orthodox theology, anthropology and ecclesiology. The book therefore deserves careful reading and reflection by Orthodox Christians concerned that their communities and the wider Church should rediscover a stronger missional dimension. While the book focuses on the challenges of mission in the secular West, I became increasingly convinced as I read the book that its analysis of how Western churches have arrived at their current dilemmas, also has something to say to the contemporary dilemmas of the churches in the traditional Orthodox heartlands of east and south-east Europe as they respond to post-communist secularization. 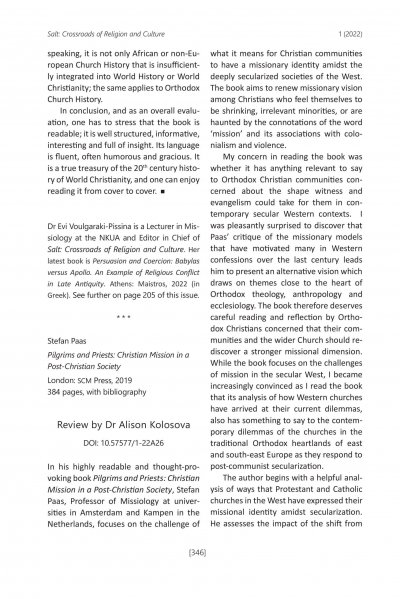