Brian Stanley, Christianity in the Twentieth Century: A World History

This one-volume history is an ambitious endeavour. It provides a map for many previously uncharted areas and a guide through the major developments of a much-troubled century, marked by two world wars, the rise and collapse of various ideologies and a constantly increasing speed of change at all levels, as well as the outbreak of several revolutions around the globe.

A prolific writer, Stanley is the leading expert on the World Missionary Conference, Edinburgh 1910, which set in motion many developments at the beginning of the 20th century, and author of a book of that title. He has also been Professor of World Christianity at the University of Edinburgh since 2009 and in this capacity has acquired a deep and broad knowledge of all the epistemological progress in the fields of Missiology and World Christianity. Thus, the volume under discussion does a great service to both these disciplines by making a smooth transition between Missiology and World Christianity, conserving and combining the expertise of both. For the reader unfamiliar with the field, one may note that World Christianity is a recently introduced branch of theology which signifies a revolutionary change in approach, focusing particularly on the perspective of Christians from the Global South—long regarded rather as passive recipients of the missionary activities of the so-called ‘countries that send missionaries,’ but who since the early 20th century, and increasingly after the Great War, speak for themselves and are indeed being heard. It is the perspective of what was considered the ‘margins’ or the ‘fringe’ of theology that becomes the centre of attention, introducing a disjunction between Christianity and Western culture and putting an end to some outdated sense of ownership of Christianity by the Western world. In this regard Stanley’s book is extremely valuable to scholars of Missiology. 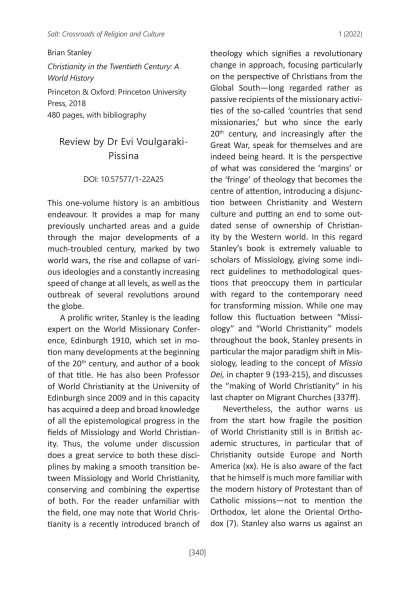