Marriage in the Baganda Community (Uganda): Observations and Questions

The article deals with the issue of customary marriage among the Baganda (sing. Muganda), the largest ethnic group in Uganda, in contradistinction to religious wedding within the Orthodox community. It describes the customary marriage process within that particular ethnicity, demonstrating the great influence and deep roots of the local people in their tradition. It notes the attitude of the faithful towards the religious marriage and problems related to their perception of it. It concludes with some suggestions on the aim of the Church to deal respectfully with the African traditions and discusses how the customary marriage could be an event united with or absorbed in the sacrament of marriage. 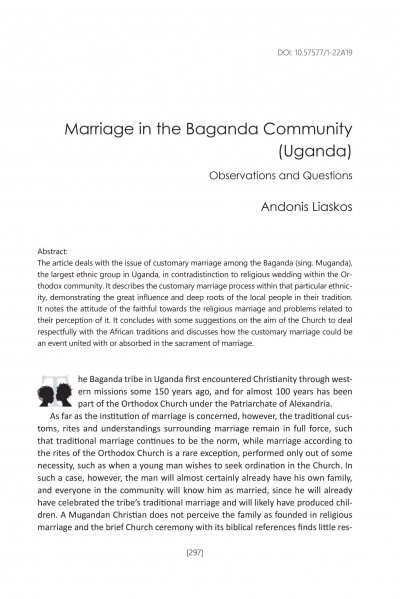 Τhe Baganda tribe in Uganda first encountered Christianity through western missions some 150 years ago, and for almost 100 years has been part of the Orthodox Church under the Patriarchate of Alexandria.

As far as the institution of marriage is concerned, however, the traditional customs, rites and understandings surrounding marriage remain in full force, such that traditional marriage continues to be the norm, while marriage according to the rites of the Orthodox Church is a rare exception, performed only out of some necessity, such as when a young man wishes to seek ordination in the Church. In such a case, however, the man will almost certainly already have his own family, and everyone in the community will know him as married, since he will already have celebrated the tribe’s traditional marriage and will likely have produced children. A Mugandan Christian does not perceive the family as founded in religious marriage and the brief Church ceremony with its biblical references finds little resonance with him or her. The word embagga, which refers to a wedding in a Church, is never used among the Baganda people to denote the status of ‘being married.’