This essay integrates a biographical sketch of His Grace, Bishop Athanasius of Kisumu and Western Kenya with a reflection on the missiology of Bishop Athanasius’ doctoral thesis. It demonstrates how His Grace’ life was directed and shaped by the missionary theology that he lived. 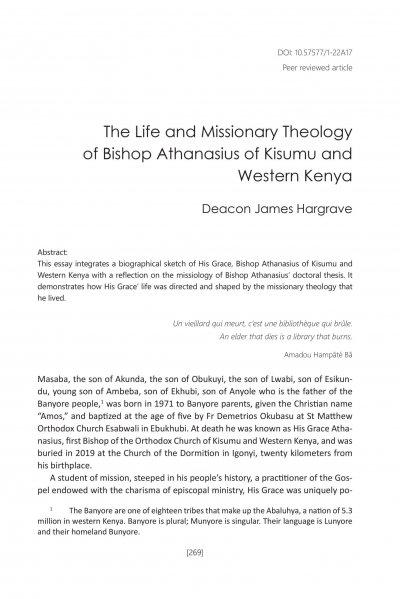 Masaba, the son of Akunda, the son of Obukuyi, the son of Lwabi, son of Esikundu, young son of Ambeba, son of Ekhubi, son of Anyole who is the father of the Banyore people, was born in 1971 to Banyore parents, given the Christian name “Amos,” and baptized at the age of five by Fr Demetrios Okubasu at St Matthew Orthodox Church Esabwali in Ebukhubi. At death he was known as His Grace Athanasius, first Bishop of the Orthodox Church of Kisumu and Western Kenya, and was buried in 2019 at the Church of the Dormition in Igonyi, twenty kilometers from his birthplace.
A student of mission, steeped in his people’s history, a practitioner of the Gospel endowed with the charisma of episcopal ministry, His Grace was uniquely positioned to write a new volume in the story of Orthodoxy in Western Kenya.