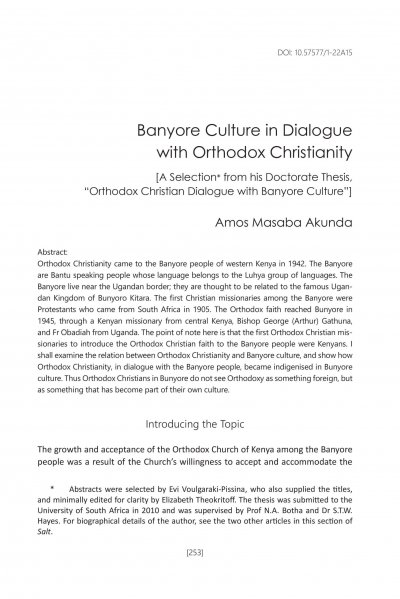 Introducing the Topic: The growth and acceptance of the Orthodox Church of Kenya among the Banyore people was a result of the Church’s willingness to accept and accommodate the local Banyore culture, to make some of the culture part of the church’s life. The willingness of the Banyore people to become part of the Orthodox Church of Kenya was solely based on the fact that Orthodox Christianity, which was regarded as a foreign religion, was embraced by Bunyore local culture.

The dialogue between the local culture of the Banyore people of western Kenya and the African Orthodox Church of Kenya is the means that was used to bring the two sides together. This dialogue led to the easy spread of Orthodoxy among the Africans of Kenya, as the ecclesiological and christological message of salvation was reconciled with the local culture to bring salvation and redemption to the people of this culture.

The Orthodox Church found an already-prepared home within African tradition, culture and ethos. We will show that African people fell in love with the Orthodox Church because of the Orthopraxia, Orthodoxia, and Orthokoinonia within its life. In this connection I have tried to explain Orthodox spirituality, especially the reflection of Orthodox liturgical praxis in Banyore cultural practices.