The Greek Orthodox Mission in India

The reference “Greek Orthodox Mission in India” does not carry any national or nationalistic implication, but the historical fact that since the 18th century Orthodoxy in West Bengal has been closely associated with the migrant Greek community of Kolkata. Until 1974 the presence of the Greek Orthodox Church in India had no missionary character. True missionary work started by Fr. Athanasios Anthidis in the 1980s, continued by the Fr. Ignatios Sennis in the 1990s until 2004, followed by Fr. Sotirios Trampas, and by Sister Nektaria Paradisi from 2006 till the present time.

Nowadays the Orthodox community of West Bengal, owing to the missionary work of the aforementioned persons and a considerable number of volunteers from Greece and U.S.A., comprises more than 5,500 believers. There are 13 churches and 13 native Indian priests under the supervision of his Eminence Metropolitan of Singapore and South Asia Konstantinos {Tsillis). Missionary and charitable work continues with the support of The Orthodox Philanthropic Society of the Orthodox Church (PSOC), and involves the establishment of primary and secondary schools, orphanages for boys and girls, as well as food and material supplies for those in need. 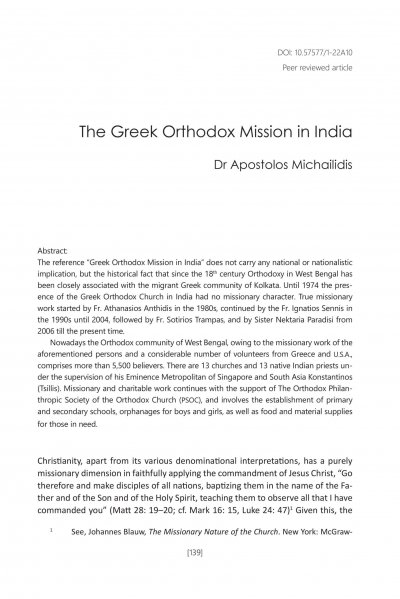 The Historical Background: Two tombstones preserved in the aisles of the Catholic Cathedral of the Virgin Mary of the Holy Rosary in the Murgihatta district of Kolkata, dated 1713 and 1728 respectively, testify to the presence of Greek immigrants already from the early 18th century. A significant number of Greek families, mainly from the Thracian cities of Adrianople (Adrianoupolis, present-day Edirne in Turkey) and Filippoupolis (present-day Plovdiv in Bulgaria), emigrated to Bengal after the loss of their properties during the Russian-Turkish War of 1767–1774. Another migratory wave arrived at the ports of East India from the Ionian Islands and the oppressed areas of Cappadocia and the Aegean Islands on ships carrying British settlers. Cross referencing of various sources leads to the conclusion that in the late 18th century approximately 120 Greek families, most of them involved in trade, were living in Bengal, mainly in Kolkata, among the total 800,000 inhabitants of the city…