A common declaration of the Editorial Board and the Advisory Board of Salt: Crossroads of Religion and Culture on the return of Agia Sophia in Istanbul to itsprevious status as a mosque by edict of President Recep Tayyip Erdoğan on the10th July 2020, which caused a lot of distress and grievance among all those wholove and cherish Byzantine culture and the Orthodox Christian faith. Thedeclaration discusses the topic with regard to history, culture, interfaithrelations, building peace and dialogue, as well as the islamic tradition[s] per se.The declaration was written by the Editor in Chief and in depth discussed andfinalized among the members of the Editorial and the Advisory Board. 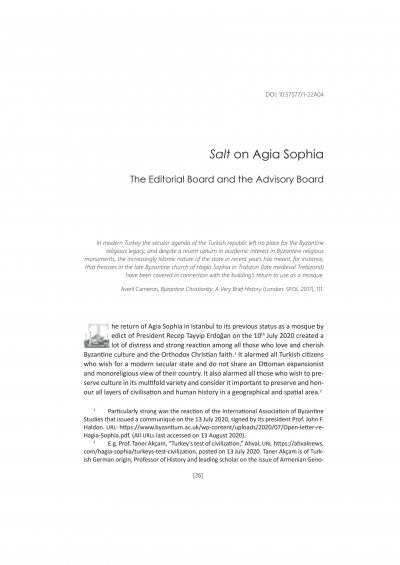 Τhe return of Agia Sophia in Istanbul to its previous status as a mosque by edict of President Recep Tayyip Erdoğan on the 10th July 2020 created a lot of distress and strong reaction among all those who love and cherish Byzantine culture and the Orthodox Christian faith. It alarmed all Turkish citizens who wish for a modern secular state and do not share an Ottoman expansionist and monoreligious view of their country. It also alarmed all those who wish to preserve culture in its multifold variety and consider it important to preserve and honour all layers of civilisation and human history in a geographical and spatial area.