A narrative of the renowned “story of the First People” in the face of the “final story” of the Gospel and the fulfilment of humankind. 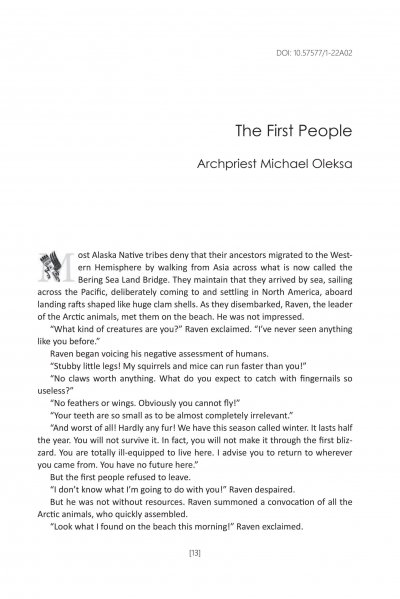 Μost Alaska Native tribes deny that their ancestors migrated to the Western Hemisphere by walking from Asia across what is now called the Bering Sea Land Bridge. They maintain that they arrived by sea, sailing across the Pacific, deliberately coming to and settling in North America, aboard landing rafts shaped like huge clam shells. As they disembarked, Raven, the leader of the Arctic animals, met them on the beach. He was not impressed.

“What kind of creatures are you?” Raven exclaimed. “I’ve never seen anything like you before.”

“Stubby little legs! My squirrels and mice can run faster than you!”

“No claws worth anything. What do you expect to catch with fingernails so useless?”

“No feathers or wings. Obviously you cannot fly!”